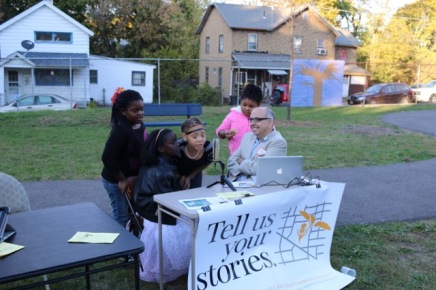 Binghamton, New York shares qualities with many small cities in the eastern U.S.: it is de-industrialized; it has a declining and aging population; health care and higher education are the main economic drivers; the stresses of economic busts are felt acutely here; and changing fortunes are slow to take hold. The city was established in the 19th century along a major riverway and the railroad soon followed to connect this center of production to markets. Cigar and carriage manufacturing gave way to shoe production and technological innovation in computing. Immigrants came from across the Northeast and overseas for work and they stayed, establishing social institutions and networks. When you are new to Binghamton, oldtimers are quick to recount past glories that have led to the present long, slow decline. Most newcomers quickly adopt the narrative.

We are working with residents in Binghamton’s “North of Main” neighborhood, situated on the west side of the city. North of Main is left out of the celebratory parts of Binghamton’s dominant heritage narrative (which centers on the successes and philanthropy of a few industrial capitalists), but is invoked at the story’s end as evidence of decline. People point to vacant houses, blighted properties and littered streets as materializations of decay, but when residents are asked to talk about places in the neighborhood that matter to them, more complex social landscapes and enduring community values and practices emerge.

Beginning in 2015, Binghamton University students working with Drs. Hart and Homsy are conducting interviews community members focused on memories, meanings, and places in the neighborhood  to investigate how neighborhood change is told through place and evaluating the effectiveness of heritage work for neighborhood-scale capacity building in a racially, ethnically, and economically heterogeneous neighborhood. In addition to analyzing interview data, the project team  is mapping the multiple meanings attached to different neighborhood places using the GIS Story Map Application, layering audio, images, and text to create stories of work, home, and community life. This website is used as a prompt for heritage focused conversations at community events and publically as a way to counter the negative stories about the neighborhood and its residents.

Click here to see the Stories from North of Main Journal

The Mansion: A Community Center at Walnut St.